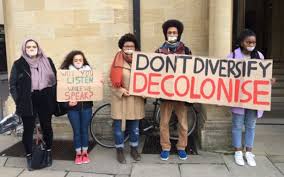 Campaigns such the NUS backed ‘Why is My Curriculum White?’ and #DecoloniseEducation promise to overturn ‘the “Whiteness”, Eurocentric domination and lack of diversity in the curricula…which frames the West as sole producers of universal knowledge’. There is growing support for making courses, faculties, reading lists and ‘core’ subjects more culturally diverse to take account of the diverse backgrounds of an expanded student population. It is argued that ‘White’ curricula are responsible for feelings of ‘isolation, marginalisation, alienation and exclusion’ among non-white students.

Critics note that while the decolonising ‘young Turks’ see themselves as more enlightened and progressive than their out-of-touch lecturers, they seem to be kicking an open door. Many academics have long been defensive about the politically incorrect history of their institutions and even their disciplines, and are quick to apologise and ditch classic texts. But at what cost? Black radical CLR James wrote that ‘the origins of my work and thought are to be found in Western European literature, Western European history and Western European thought’ and argued that black people could liberate themselves by embracing the universal legacy of Shakespeare and Hegel, Mozart and Melville. Might limiting students to knowledge deemed appropriate to their cultural background leave them without any grounding in major intellectual developments? Isn’t the point of learning to transcend one’s particular cultural background? Or does a curriculum dominated by the ‘pale, male and stale’ explain the attainment gap, whereby non-white students are 20% less likely to achieve a first or 2:1 degree, despite arriving at university with the same grades?

Should education, at school or university, be about reflecting students’ cultural identities? Or should education be about creating, even imposing, a different type of identity – not given by biological fact or social background – but that of the educated individual? Is the identity of the educated person really open to all, as supporters of liberal education have claimed in the past? Or is such an identity a mask that hides oppressive power relations as many of today’s student campaigns allege?