The 26 September 2013 sees the 25th anniversary of the publication of Salman Rushdie’s The Satanic Verses. Rushdie has argued that it could not be published today. Have publishers become cowardly and writers taken to consciously or unconsciously engaging in self-censorship? The furore over the publication of Monica Ali’s Brick Lane or more recently of Sherry Jones’ The Jewel of Medina showed the politically correct watchdogs in the academy are at the forefront of the modern literary censorship as much as any mad mullahs.

Despite the stand made by Penguin in defence of their freedom to publish, has the Rushdie Affair damaged a cherished literary freedom based on artistic judgements alone?

25 years on, after many thousands of articles and books on the Rushdie Affair and a knighthood for Rushdie himself, there is an uneasy avoidance of the challenges to literary freedom and freedom of speech that the publication of The Satanic Verses provoked. Is it head in the sand time for commentators and critics and self-imposed quietude and conformism for writers, or can challenging and imaginative literary works still be written?

For this special Battle of Ideas Satellite hosted by the East Midlands Salon a distinguished panel of writers and academics will take part in a round table rumble over the legacy of the Rushdie Affair on literary creativity with lots of time for comments and challenges from the audience.

Kenan Malik ‘The Myths of Muslim Rage’, 12 September 2012
Daniel Kalder ‘In search of the Jewel of Medina controversy’, The Guardian,  5 March 2009.
BBC News:  ‘Salman Rushdie ‘the Satanic Verses would not be published today’ September 17 2012.
Isaac Chotner, ‘How the Mullahs won,’ The Atlantic, December 2012.
Kenan Malik’s discussion of the Rushdie Affair at the Battle of Ideas 2008.
Times Talks: ‘Salman Rushdie: The Fatwa 20 Years Later’, 7 July 2009.

Introduction by Vanessa Pupavac of the East Midlands Salon 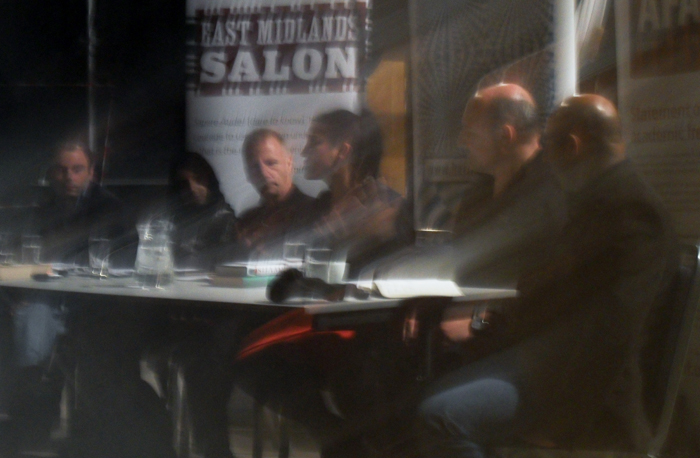 Jasvinder speaking at the Salon